The church’s role in racial reconciliation: a sermon by Martin Luther King Jr.

“Segregation is a moral evil which no Christian can accept. The church must make it clear that if we are to be true witnesses of Jesus Christ, we can no longer give our allegiance to a system of segregation.”

Editor’s Note: Two years before his famous March on Washington, Martin Luther King Jr. visited Southern Seminary and spoke in chapel. His address, titled “The Church on the Frontier of Racial Tension,” was a prophetic challenge for the church to shut down the old age of racism and segregation and bring about a new age of racial unity. Below is an excerpt from the address. The full text and audio is available here.

I would like to have you think with me from the subject, “The Church on the Frontier of Racial Tension.” Those of us who live in the twentieth century are privileged to live in one of the most momentous periods of human history. Indeed, we have the privilege of standing between two ages: the dying old and the emerging new. An old order is passing away, and a new order is coming into being.

Now we are all familiar with this old order that is passing away because we have lived with it, and we have seen it in all its dimensions. We have seen the old order in Asia and Africa, in the form of colonialism and imperialism. There are approximately two billion eight hundred million people in this world, and as you know the vast majority of these people live in Asia and Africa. Through the years they have been dominated politically, exploited economically, segregated and humiliated by foreign powers, but as Prime Minister MacMillan said a few months ago, “The wind of change began to blow,” and what a mighty wind it is.

We all know the long history of the old order in the United States. It had its beginning in 1619, when the first slaves landed on the shores of this nation. And unlike the Pilgrim fathers who landed at Plymouth a year later, they were brought here against their wills, and throughout slavery the Negro was treated as a thing to be used, rather than a person to be respected. With the growth of slavery it became necessary to give some justification for it. It seems to be a fact of life that human beings cannot continue to do wrong without eventually reaching out for some thin rationalization to clothe an obvious wrong in the beautiful garments of righteousness.

In 1954, on May 17, the Supreme Court of the nation rendered a decision. In 1857 the Supreme Court had rendered the Dred Scott decision. It said, in substance, that the Negro was not a citizen of the United States, he was merely property subject to the dictates of his owner. In 1896 the Supreme Court had rendered the Plessy versus Ferguson decision, which established the doctrine of separate but equal as the law of the land. In 1954 the Supreme Court came out with another decision. Its aid in substance that old Plessy doctrine must go, that separate facilities are inherently unequal, and that to segregate a child on the basis of his race is to deny that child equal protection of the law. As a result of this decision, we stand on the threshold of one of the most creative and constructive periods in the history of our nation in the area of race relations. To put it figuratively in Biblical language, we’ve broken loose from the Egypt of slavery and we’ve moved through the wilderness of segregation, and now we stand on the border of the promised land of integration. The old order of segregation is passing away and the new order of freedom and equality is coming into being. But all people do not welcome this emerging new order.

Why should the church fight for racial reconciliation?

How can every church fight for racial reconciliation?

First, the church must urge its worshippers to develop a world perspective. Whenever men develop a world outlook, they rise above the shackles of racial prejudice and racial hatred, and whenever we find individuals caught in the shackles of racial prejudices, they are the victims of narrow provincialism and sectionalisms So the church must urge its worshippers to rise above the narrow confines of their individualistic concerns to the broader concerns of all humanity. So you see, the world in which we live today is a world that is geographically one. And in order to solve the problems in the days ahead, we must make it spiritually one.

The world in which we live is geographically one. Through our scientific and technological genius, we have made of this world a neighborhood, It is urgently true that now we are challenged through our spiritual and moral commitments to make of this world a brotherhood. In a real sense we must all live together as brothers or we will all perish together as fools. We must see this sense of dependence, this sense of interdependence. No individual can live alone, no nation can live alone; we are made to live together. The church must get this over in every community, in every section of this nation, in every country of this world.

Teach that segregation is evil

The church also has the responsibility of getting to the ideational roots of racial prejudice. Racial prejudice is always derived from or based on fears, and suspicions, and misunderstanding that are usually groundless. The church can do a great deal to direct the popular mind at this point and to clear up these misunderstandings and these false ideas.

Many of these ideas are disseminated by politicians who merely use the issue to arouse the fears and to perpetuate themselves in office. The church can make it clear that these things are not true. The church can rise up and through its channels of religious education tell the truth on this issue. The church can say to men everywhere that the idea of an inferior or a superior race is a false idea that has been refuted by the best evidence of the anthropological scientists. They tell us that there are no superior races or no inferior races. There may be superior individuals academically and inferior individuals academically in all races.

RELATED: Must every church be multi-ethnic?

The church can make it clear that all of the talk about intermarriage and all of the fears that come into being on the subject are groundless fears. Properly speaking, individuals marry, and not races. And people, in the final analysis, in a democracy must have the freedom to marry anybody they want to marry. And so no state should have laws prohibiting this. But even in spite of guaranteeing this freedom, the church can make it clear that the basic aim of the Negro is to be the white man’s brother and not his brother-in-law. This can be made clear. So there are many false ideas that are constantly disseminated that the church can do a great deal to refute.

One of the best ways that the church can do this is to remove the yoke of segregation from its own body. Oh, it has been said many times and I am forced to repeat it: it is tragic indeed that the church is the most segregated major institution in America. It is tragic indeed that on Sunday morning at 11 o’clock when we stand to sing, “In Christ There Is No East or West!” we stand in the most segregated hour of Christian America. So often in the church we’ve had a high blood pressure of creeds and an anemia of deeds. But thank God we are beginning now to shake the lethargy from our souls, and we are coming to see that if we are to be true followers of Jesus Christ we must stand up and solve this problem.

Repent and forgive one another

There is another thing, a final thing that the church must do. The church must urge all men to enter the new age with understanding, creative good will in the hearts. This is true for everybody. This is true for those who have been on the oppressor end of the old order and those who have been on the oppressed end. Those who have been on the oppressor end must go into this new age with a sense of penitence, with a real sense of understanding. They must search their souls to be sure that they have removed every vestige of prejudice and bigotry, and that they have moved away from any philosophy of white supremacy. If they fail to do this, many tragedies will occur and the new age which is emerging will have many problems to solve in future years. But not only that.

I would not limit myself to saying what the white man must do in order to make this new order possible, I have tried to make it clear in the last few years that the Negro himself must go into this new age with understanding, redemptive good will in his heart. I have said over and over again that we must work passionately and unrelentingly for first-class citizenship, but we must never use second-class methods to gain it. Of course I know, and you know, the temptations which we face—those of us who have been trampled over so long, those of us who have been victims of lynching mobs, those of us who have seen with our own eyes police brutality, those of us who have seen so many tragic conditions that tended to destroy our personhood. There is the temptation that we will enter the new age with bitterness in our hearts. But I am convinced that if this happens, the new order which is emerging will be nothing but a duplicate of the old order.

Let us realize that the problem will not just work itself out, we have the responsibility of helping to work it out. It will not be solved until men and women all over this nation are willing to stand up with a sort of divine discontent. We know that in the process, God struggles with us.

There is something in this universe which justifies Carlisle in saying, “No lie can live forever.” There is something in this universe which justifies William Cullen Bryant in saying, “Truth crushed to earth will rise again.” And so with this faith we move out into the vast possibilities of the future, and if we will go on with this faith and this determination to struggle; we will be able to bring into being this society of brotherhood, transforming the gangling discords of our southland into a beautiful symphony of peaceful relationships, and this will be the day, figuratively speaking, “the morning stars will sing together and the sons of God will shout for joy.” 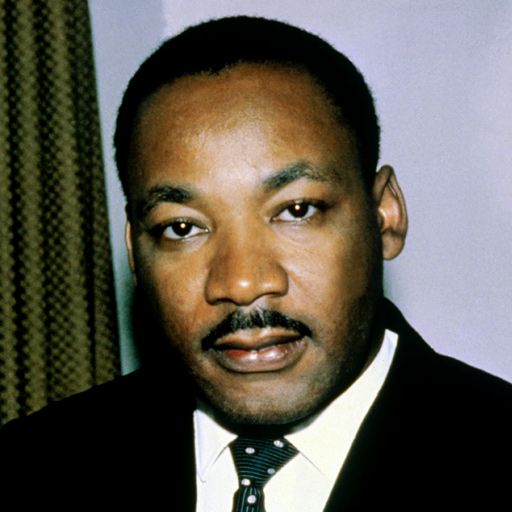