Home · Article · How to have ministry heroes without plagiarizing them

How to have ministry heroes without plagiarizing them

Scripture certainly gives warrant to have heroes, to study and emulate men and women of the faith whose lives are so marked by humble, courageous Christ-honoring character and grace-enabled skill in living the Christian life.

When I was 12 years old, Pete Rose was my hero. In little league baseball, I wore number 14 on the back of my uniform, had Rose’s Beatles-style bowl haircut, sprinted to first base on walks, ran the bases with reckless abandon, and slid head-first into them. When hitting, I crouched low at the plate. On the field, I went all out, all the time. My teammates called me “Charlie Hustle” (Charles is my first name and for the non-baseball reader, CH was Pete Rose’s famous nickname), and I reveled in it.

As I grew up, two things became clear: the Lord didn’t give me nearly enough talent to fulfill my dream of playing second base for the Cincinnati Reds (or any other big league club, for that matter), and Pete Rose had some serious character flaws which led him to prison and a lifetime ban from baseball. I’ve been praying for Pete Rose for many years, that the Hit King (he’s baseball’s all-time hits leader) would run head-first in repentance and faith to the King of Kings.

When I began to work in newspapers as a young adult, skilled writers and journalists became my heroes. I loved the baseball writing of Roger Kahn and Thomas Boswell. In college, I couldn’t get enough of William Faulkner or Ernest Hemingway or Shelby Foote or Mark Twin. I discovered Flannery O’Connor’s fiction, David McCullough’s history, and J. R. R. Tolkien’s Middle Earth. I wanted to write like them. I wanted to make people laugh like Southern humorist Lewis Grizzard—who spoke at my college graduation. I wanted to write with verve and vigor, precision and concision, character and conviction—like they all did.

Then God called me to ministry, and I began to be shaped by pastors and theologians: John MacArthur, R. C. Sproul, John Piper, Adrian Rogers, Albert Mohler, Iain Murray, Tom Nettles and many other living ministers. From church history there’s always been John Calvin, Martyn Lloyd-Jones, Charles Spurgeon, John Bunyan, J .C. Ryle, and a host of others.

I had (and have) ministry heroes.

What is a hero? In his highly commendable book Heroes, Iain Murray (one of my historian heroes), quoting the Shorter Oxford English Dictionary, defines a hero as: “’A man who exhibits extraordinary . . . greatness of soul, in connection with any pursuit, work or enterprise.’” (He goes on to say the same would apply to female heroes).

Scripture certainly gives warrant to have heroes, to study and emulate men and women of the faith whose lives are so marked by humble, courageous Christ-honoring character and grace-enabled skill in living the Christian life.

The Bible on heroes

Paul tells the Corinthians, “Be imitators of me, as I am of Christ” (1 Cor. 11:1). At first glance, that might strike some as slightly egotistical, but the second phrase clarifies what Paul is really saying: “Insofar as I’m like Christ, be like me.”

Paul was a hero to young Timothy, as the pastoral letters from the veteran minister to the pastoral rookie demonstrates. In 1 Corinthians 4:16-17, Paul touts himself as a bonafide spiritual father to church members at Corinth, a spiritual hero, just as he has been to Timothy:

“I urge you, then, be imitators of me. That is why I sent you Timothy, my beloved and faithful child in the Lord, to remind you of my ways in Christ, as I teach them everywhere in every church.”

The Epistle to the Hebrews gives Christians even clearer warrant to have heroes. There’s chapter 11, often called the hall of faith, which gives mini-biographies of some of the great heroes from the Old Testament. Earlier in the letter, the writer commends Abraham and other paragons of faith to a Jewish church undergoing persecution and flirting with abandoning the Christian faith and returning to a more politically acceptable Judaism:

“And we desire each one of you to show the same earnestness to have the full assurance of hope until the end, so that you may not be sluggish, but imitators of those who through faith and patience inherit the promises.” (Heb. 6:11-12)

From Abraham to Moses, Daniel, and the apostle Paul, Scripture commends some lives as worthy of examination and emulation by others.

I think every pastor, theologian, missionary, evangelist or ministry worker should adopt examples to emulate. Of course, when you’re dealing with fallible humans, there are always pitfalls. So, how can we have heroes without trying to become them?

1. Realize they are just men.

Even the best men (yes, universally of all humans) are men at best. Pete Rose was a baseball player with feet of clay, which he has stumbled over for decades since his on-field career ended. That doesn’t surprise me. He was just a baseball player.

God’s ministers, even the best of them, are also men at best. In choosing heroes, we are admiring men who are fallen, weak, fickle, unpredictable clay pots—redeemed sinners. We want to learn from the strengths, but also from their weaknesses. As Paul counseled his audience, we want to be like them insofar as they’re like Christ. Jesus is the ultimate hero undergirding every saved sinner’s story. It’s easy to forget that and admire our heroes to an unhealthy degree, but we must not.

2. Feel free to disagree with them, even on critical issues.

I’ve been shaped in many ways by John Calvin’s books and biography, but I’m a Baptist and could never affirm his view of baptism. And I’m still not completely sure how to view the Servetus affair. That’s true of many of my living heroes as well. John MacArthur is a dispensationalist, and I’m not. Still, his approach to exegeting a biblical text has probably shaped mine more than any other living preacher.

Having only living heroes tempts us to chronological snobbery. Having only dead heroes tempts us to a strange form of traditionalism or even idolatry. As one of my pastoral heroes, Harry Reeder, has well said we learn from the past to live in the present and to change the future. The advantage of having heroes from history is that they have completed their race of faith. The final chapter of their lives has been written, so we know how they finished. Living heroes are men you can still meet and engage directly, even adopt as mentors.

4. Have more than one living (or dead) hero.

There’s a real danger of merely aping that one man if he’s the only one who influences your ministry. Unhealthy hero worship can appear cult like, particularly if you begin to think your hero is the only one with the truth on an issue or has the only “biblical” approach to an issue. Some of my heroes are Baptists and some are not.

5. Don’t steal their sermons or their personalities.

Quote them. Imbibe their theology insofar as it is biblical. Mimic their character—insofar as it is like Jesus. But don’t take on their personality—you’re not them and you’ll probably come off as weird or awkward at best.

Allow these men to influence you, even shape your faithfulness to the Scriptures and to proclaiming the Bible, but don’t try to imitate them because you aren’t them—you’re you. God already has John Piper and doesn’t want you to try to be his second coming. Your ministry will be influenced by all your heroes and their sermons and writings will indwell you in some sense; but their influence will get mixed with your personality and out of that mix God will shape a unique minister and a unique ministry—unique to you.

Heroes don’t have to be famous

I’ve also admired and been deeply helped by pastors and Christian friends whose names the world will never know. Some of them are from obscure, out-of-the-way places like Frisco City, Alabama, and Blairsville, Georgia. Some of them don’t have a seminary education—yet I pray that God will use me half as much for his kingdom and glory as he’s used them. Being a strong man of God has more to do with humility and holiness than expertise and notoriety. Over the years I’ve realized there’s an eternity’s difference between knowing about God and knowing God.

There were a number of godly men in my childhood church whom I admired, and they exercised a major influence on the man and minister I am 30-40 years later. Your heroes by no means have to be known by the world, just godly people whose salty, light-giving lives will lead you, not to themselves, but to Christ.

Editors’ note: Don’t miss a new class beginning this fall taught by SBTS President Albert Mohler, Preaching and Preachers. The seven-week course begins October 7 and will be taught via live Zoom video conference. It will examine the preaching of several noted pastors from church history as well as contemporary figures—both commendable and not so commendable. The class may be taken for seminary credit or as a non-seminary study. Register here. 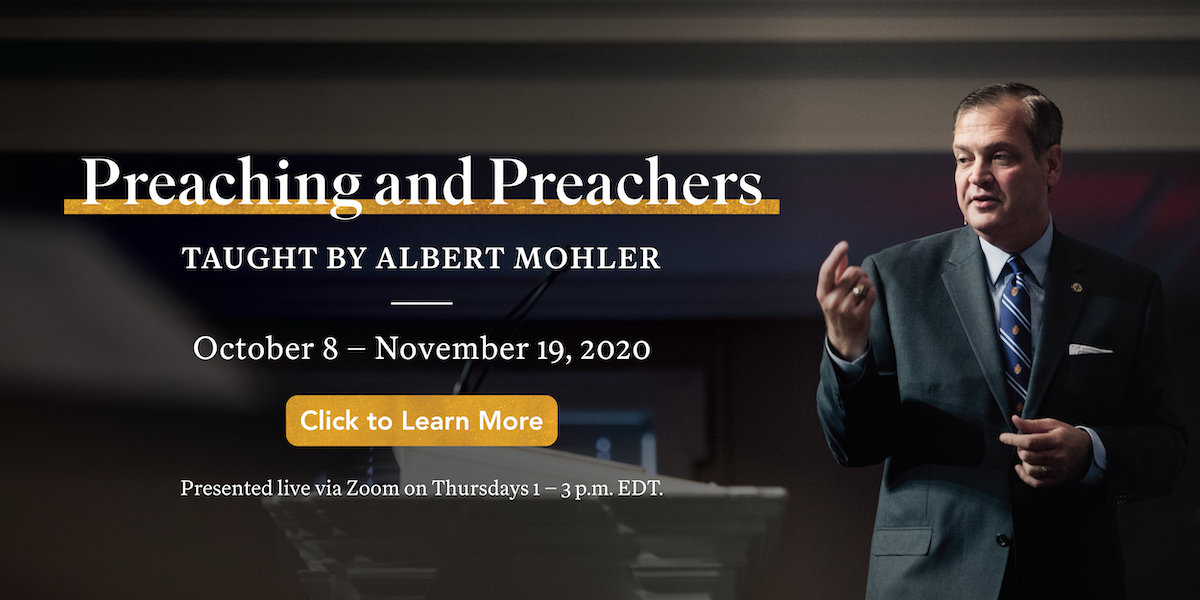 Director of News and Information

Jeff Robinson (M.Div. and Ph.D., SBTS) is director of news and information at Southern Seminary. He is pastor of Christ Fellowship Baptist Church in Louisville, served as senior editor for The Gospel Coalition for six years, and is also adjunct professor of church history and senior research and teaching associate for the Andrew Fuller Center at SBTS. He is co-author with Michael A. G. Haykin of To the Ends of the Earth: Calvin’s Missional Vision and Legacy (Crossway, 2014) and co-editor with D. A. Carson of Coming Home: Essays on the New Heaven and New Earth (Crossway) and 15 Things Seminary Couldn’t Teach Me with Collin Hansen. He is author of Taming the Tongue: How the Gospel Transforms Our Talk (TGC, forthcoming). Jeff and his wife, Lisa, have four children.