“Everyone is asking how can we turn the tide? The answer is spiritual revival.”

The following article is adapted from Billy Graham’s message at the Oct. 14, 1993, worship service held at Freedom Hall in Louisville during inauguration ceremonies for R. Albert Mohler Jr. as Southern Seminary’s ninth president.

I recently asked a university president what he thought was the greatest need of our hour. And after careful consideration, the president responded, “I may surprise you, because I’m not a religious man. But I believe that the greatest need we have at this hour is a spiritual awakening which will restore individual and collective morals and integrity throughout the nation.” I agree with that.

But this is that which was spoken by the prophet Joel:

And it shall come to pass in the last days, saith God, I will pour out my Spirit upon all flesh: and your sons and your daughters shall prophesy, and your young men shall see visions, and your old men shall dream dreams: And on my servants and on my handmaidens I will pour out in those days of my Spirit; and they shall prophesy: And I will shew wonders in heaven above, and signs in the earth beneath; blood, and fire, and vapor of smoke: The sun shall be turned into darkness, and the moon into blood, before that great and notable day of the Lord comes: And it shall come to pass that whosoever shall call upon the name of the Lord shall be saved (Acts 2:16-21, KJV).

Young men will have visions. You have elected a young man here with a tremendous vision, not only for the future of this theological seminary but for the future of evangelism and missions in the Southern Baptist Convention and the world.

Old men will dream dreams. In our context, where I’m an old man, that means that they will know how to support the vision of the young.

Here’s a young man, and I want to tell you, I support him with all my heart and will pray for him daily from now on. I think we need to support these young men that God is raising up. It’s not easy for an old generation to hand the torch to a new generation that’s coming up, but that’s what’s happening here tonight and I thank God for the young men and the young women that he has raised up, not only in this seminary but in other parts of the world. There are those on the board and the faculty and among friends that will support you in their prayers and their gifts and their love.

There will come hard times; there will come difficult times. It always happens, whether it’s in marriage or you’re taking a new position or whether you’re in a seminary.

You know I was called when I was about that same age to be president of a small Bible school and college in Minneapolis, Minnesota. I learned very early that it’s not always easy. There are many decisions that you have to make. One of the things that will be difficult for Dr. Mohler will be the great expectancy there is of him at this moment. And he’ll have to make hard decisions that not everyone will like. There’s no decision that you can make in that work that will please everyone. He knows that better than anyone. I believe God has raised him up for such an hour as this.

I remember the first time I came here Dr. Duke McCall was president. And he and I had become very close friends. I remember the thrill and the joy it was to stand before that student body and faculty and talk about Christ and realize that they were going to the ends of the earth with the gospel of Christ as professors and as evangelists and as pastors. That’s what happened. Wherever you go throughout the world you’ll see Southern graduates and people that have come from here. Dr. Roy Honeycutt followed along with the same pattern and now comes Dr. Mohler. Now he has come young enough to be here at least 40 years. I’ve tried to figure out how old I will be 40 years from now. I will have been in heaven a number of years. But if we’re able to look down here, I will be watching and praying up there for him and for you and for all of us because I think he’s laid out a tremendous vision of what can be done with the largest Protestant denomination in this country. It’s making an impact all over the world.

I find that people today are lonely. When I preach on loneliness on television, we get thousands of letters. So many people are in marriage alone, in school alone, people on every block in the city are lonely. They need joy and hope and fellowship. I find that there’s despair in this country. In addition, people in the midst of a very impersonal computer age are hungry. They’re hungry and thirsty.

Did you know that in the next three or four years, we’re going to be able to get 500 channels on your TV set? And the TV set is going to be hooked to the telephone and to all the different instruments in your home, it will be all one big package and you will have more information flowing into your house and into your mind than you could ever dream about. This is going to cause us to become a sardine village, we’ll be so packed together and so much information that we could destroy ourselves.

There is a hole in our heart that only God can fill. Pascal, the great 17th century scientist and philosopher, stated, “In every human heart is a God-shaped vacuum that only God can fill.” Jesus said, “Put God first and everything will fall into place.” We as a nation need to put God first. We’ve taken God out of the schools and put sex in — sex education for kids and taken out prayer.

Yes, our nation can be changed. It can start with you. Revivals start in the heart of somebody. Somebody asked if you want to eat an elephant, how would you eat an elephant? One bite at a time! Are you willing to make that kind of commitment today, that you will be in your place, faithful, loyal, a yielded mind, the mind of Christ dominating your thinking, a body that is yielded? Are you willing to make a commitment to evangelism? That you will go out as a believer and help to witness to other people about Jesus Christ?

I know that we need a spiritual awakening. Can we organize one? There are generalizations about awakenings. First, there’s the recognition of the sovereignty of God. Sometimes we don’t understand. Awakenings just start. But it is of God.

Thirdly, there’s the spiritual power of a minority. The awakenings seemingly never occur without concern by burdened, dedicated people and it always starts with prayer and the study of the Scriptures.

I used to hear sermons about separation from the world. We don’t hear that anymore very much — being separated from the world so that our hearts can hear God. If God spoke, would we hear him? I’m sure he’s speaking now through his word and I’m sure God is speaking at Southern Seminary through the professors and the students and certainly through this brilliant young president that you’ve called. God is going to speak and God is going to use you.

Dream for a moment about revival. What would happen?

First, there would be moral reform. Everyone is asking how can we turn the tide? The answer is spiritual revival. Secondly, we must get our priorities straight: get back to the Bible. Thirdly, awakening could be the basis of restoring our first love and reconciliation and a unity within the Southern Baptist Convention. We need to love one another. We can disagree, of course, but we need to love one another. And some of the things that people have said on all sides and the controversies that have gone on, I cannot believe would be from the mouth of Jesus. I think that we need a love that we have never known before and I am praying for a baptism of love that will sweep this convention and it can start in Louisville at the seminary.

This seminary is looked upon as the leading educational institution perhaps in the world for Baptists. You have a tremendous responsibility. That doesn’t mean that you give up your convictions at all. There comes times when you have to stand. There come times when there has to be confrontation. But it must be done in a spirit of love and I think that it can be. I think that can be recovered by the Holy Spirit. We’re praying that the Holy Spirit will come in mighty powers like he came at Pentecost. And we may speak different languages but our hearts are bound together by our faith in Christ.

Since the 1970s, the Center for World Evangelization has been at Southern Seminary. And Dr. Mohler has informed me that this center is being expanded to a graduate school of missions, evangelism, and church growth, as you’ve heard tonight. And I am greatly encouraged by the seminary’s renewed commitment to leadership and training ministers of the gospel to go out in evangelism. An awakening can bring about evangelization of the world in our generation.

We need your prayers and we want to join hands with Southern Seminary in both theology and evangelization. We will do everything we can in our power to support Dr. Mohler and the faculty and the staff and the trustees of this great institution. You certainly have my love and my prayers. May God bless you. 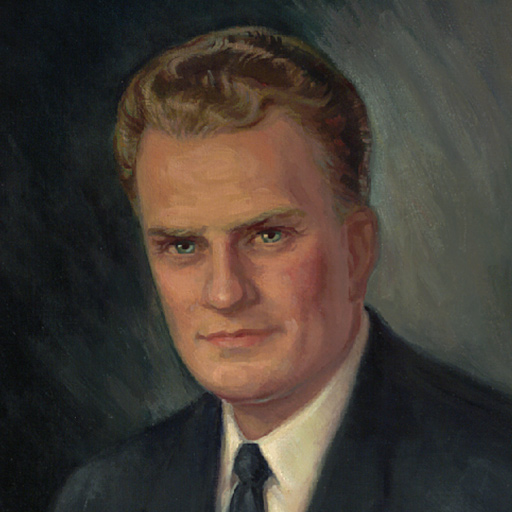