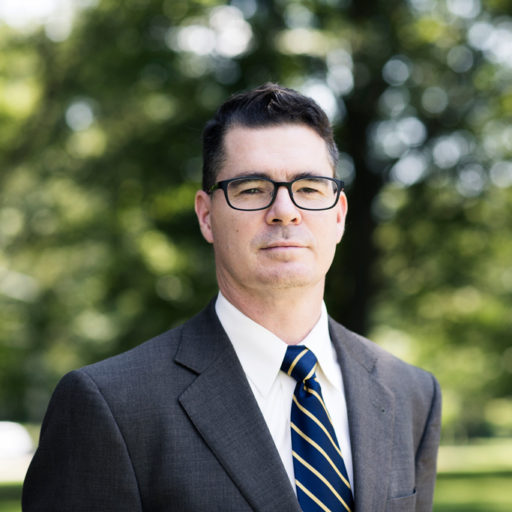 John Wilsey is a Georgia native whose interests lie in the history of how America has viewed itself, how it has understood its place in the world, and how theology has influenced American national identity. As a historian of ideas in church history, Wilsey is also interested in the Enlightenment, religious freedom, American church/state relations, and the contributions the Black church has made to American religious and political culture.

Between 1992 and 2011, Wilsey taught history and Bible in middle and high school classrooms, held positions in Christian school administration, and served on pastoral staff in schools and churches in North Carolina and Virginia. He holds a B.A. in history from Furman University (1992), and an M.Div. (1998) and Ph.D. (2010) from Southeastern Baptist Theological Seminary. From 2011–2017, Wilsey taught history and philosophy at Southwestern Baptist Theological Seminary, and in the academic year 2017–18, Wilsey was the William E. Simon Visiting Fellow in Religion and Public Life with the James Madison Program in American Ideals and Institutions at Princeton University.

Wilsey is the author of One Nation Under God: An Evangelical Critique of Christian America (Pickwick, 2011), American Exceptionalism and Civil Religion: Reassessing the History of an Idea (IVP Academic, 2015), and editor of Alexis de Tocqueville’s classic 1840 work, Democracy in America: A New Abridgment for Students (Lexham, 2016). While at Princeton, Wilsey conducted research for his most recent book on John Foster Dulles, Secretary of State in the Eisenhower Administration from 1953–1959. The book is entitled God’s Cold Warrior: The Life and Faith of John Foster Dulles and appears in Eerdmans’ Library of Religious Biography series.

Wilsey was named the 2019–2020 Tutor of the Year in Boyce College’s Augustine Honors Collegium. In addition to his work at Southern and Boyce, Wilsey has been an invited lecturer at Princeton University, Princeton Theological Seminary, the University of Notre Dame, the University of Louisville, the Ruprecht Karl University of Heidelberg, Waynesburg University, Calvin University, St. Francis University, Hannibal-LaGrange University, Charleston Southern University, Grand Valley State University, the College of Biblical Studies, and Houston Baptist University. He is an Affiliate Scholar with the Acton Institute for the Study of Religion and Liberty, and a Senior Fellow with the Center for Religion, Democracy, and Culture at First Liberty Institute. He has read academic papers at the Evangelical Theological Society, the Conference on Faith and History, the Christian Scholars’ Conference, the Society for Values in Higher Education, the Society for US Intellectual History, the African American Intellectual History Society, the Ciceronian Society, the Association for the Scientific Study of Religion, and the Center for Christian Study in Charlottesville, Virginia. His public writings have appeared in outlets such as Acton’s Commentary, Christianity Today, Providence: A Journal of Christianity and American Foreign Policy, Public Discourse, 9Marks Journal, The Gospel Coalition, Aeon, History News Network, The American Conservative, Themelios, Anxious Bench, Religion and Liberty, and Religion in American History.

He is a member of Kenwood Baptist Church at Victory Memorial in Louisville. His wife Mandy and their two daughters, Caroline and Sally, bring joy to him each day

Director of News and Information

Jeff Robinson (M.Div. and Ph.D., SBTS) is director of news and information at Southern Seminary. He is pastor of Christ Fellowship Baptist Church in Louisville, served as senior editor for The Gospel Coalition for six years, and is also adjunct professor of church history and senior research and teaching associate for the Andrew Fuller Center at SBTS. He is co-author with Michael A. G. Haykin of To the Ends of the Earth: Calvin’s Missional Vision and Legacy (Crossway, 2014) and co-editor with D. A. Carson of Coming Home: Essays on the New Heaven and New Earth (Crossway) and 15 Things Seminary Couldn’t Teach Me with Collin Hansen. He is author of Taming the Tongue: How the Gospel Transforms Our Talk (TGC, forthcoming). Jeff and his wife, Lisa, have four children.