Of course, the most important factor here is theology. We can draw a direct line from the theological liberalism that captured the mainline schools to the collapse of their enrollment. The irony, not missed by theological conservatives, is that the promise of theological liberalism is to save Christianity by surrendering its essential truth claims.

Diogenes Allen, for decades a professor at Princeton Theological Seminary, described the situation by using the metaphor of a raft. In his illustration, the church is a raft driven by the currents of a river. In his argument, so long as the water is calm, the raft can take on more and more freight. The freight represents doctrines and moral teachings. So long as the water is smooth, the raft can take on more and more doctrine and stay afloat. But, he warned, the modern age is not calm water. The raft (the church) is not staying afloat in the rapids of the modern age, with all its anti-supernaturalism and secularization. In such waters, he advised, the church needs to start jettisoning freight — abandoning doctrines that are just too costly in the modern age.

We can see how this argument won the day among liberal Protestants. When faced by adversity and intellectual challenge, when the culture takes a turn, they simply turn with the culture. The mainline seminaries and divinity schools led in this effort. But — to no surprise — they are left with very few students, and many of the students they do have are not headed for ministry in the local church.

Just a few decades ago, Southern Seminary found itself in just such a theological position. In 1993, when I became the school’s president, we were told that if you took a seminary and returned it to its confessional integrity, if you took the fullness of truth and made it central to the school’s identity and commitments, and if you required that the seminary would teach and stand for the complete and utter trustworthiness and truthfulness of the Word of God, you would have no students, no donors, and no friends.

Well, to the glory of God, Southern Seminary is now the largest accredited seminary in the world. 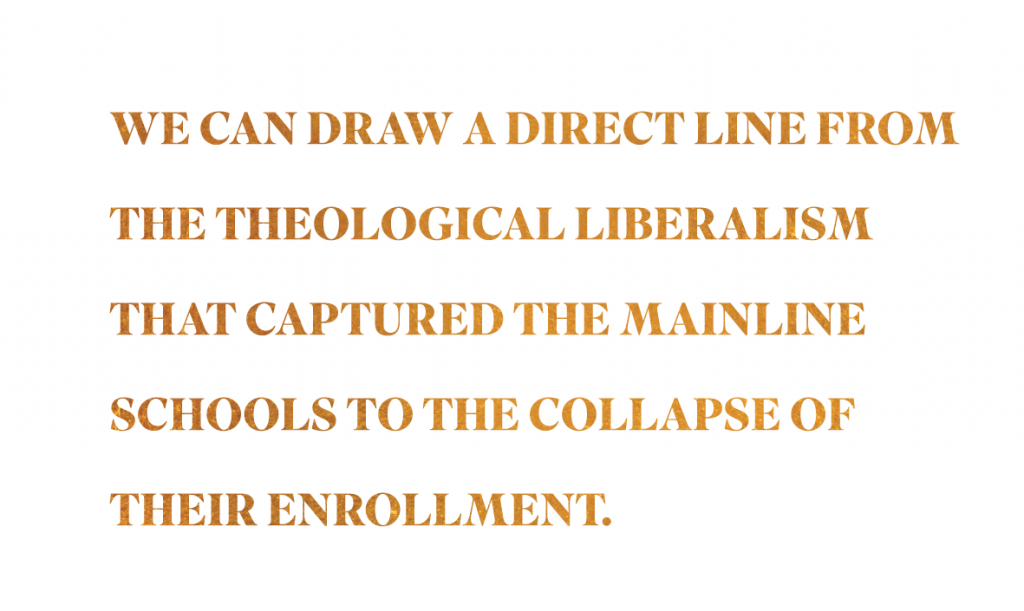 A shared legacy of truth

It’s important to note that the seminary’s current theological fidelity is not a new phase in the history of Southern Seminary. Rather, it is nothing less than a return to the intent of those who founded the school in 1859. From the beginning, Southern Seminary was to be marked by its commitment to the Abstract of Principles, the statement of faith that was to guide the school’s teaching.

When faculty members sign the Abstract of Principles at Southern Seminary, they are saying that they will teach in accordance with and not contrary to everything contained in the Abstract of Principles. When they sign that document, it’s not that they sign it merely as a symbolic act. It’s not that they sign it merely saying they understand this is what the institution represents, or that they agree to teach within these theological boundaries, but that they confess this is the faith they believe and want to teach. Our faculty not only teaches the truth, but believes and embraces it.

We live in an age rightly described as “post-truth.” It is now fashionable to speak of “truth” as a socially constructed sentiment or emotion. This relativism has infected our society, surrounding us with millions of people who fail to realize that they are moral relativists. At a time when truth is more threatened than ever, we will soon discover which Christian institutions will crumble and which will stand firm.

Nothing could be more dangerous than a theological seminary that is not clearly and explicitly and continually and always grounded in truth. The absolute determination of Southern Seminary is that we will continue to deliver a theological education of the highest quality from the highest degree of conviction — without any compromise whatsoever in doctrine or substance. That was my commitment when I became the president of Southern Seminary in 1993, and I remain committed to that conviction more than 25 years later.

At Southern Seminary, you see that determination on display, and you see why this school has long been trusted for truth. All of God’s people are called to know that truth, and to teach it faithfully to future generations. Our God is a God of truth. Indeed, the sum of his word is truth (Psalm 119:160), and the Lord Jesus Christ tells us that he himself is the truth (John 14:6).

In John 17:17, Jesus, in his famous High Priestly Prayer, asks his Father, “Sanctify them in your truth; your Word is truth.” Christ prayed that the Word of God would purify his church — that the inerrant and infallible Scriptures would make the people of God a holy people. That purpose is our calling, and it is the starting place for all theological education. At Southern Seminary, we are called to the faithful stewardship of that truth, once for all delivered to the saints. More than anything else, we want Southern Seminary to be trusted for the task of preparing men and women for a lifetime of gospel ministry in the midst of an increasingly confused world.

We pray that Southern Seminary will be trusted, both in this generation and in generations to come. It is only through truth that the gospel is preached and taught, and consequently believed and heard. If we are to be trusted for anything, may all those living know that this seminary is determined to be trusted for truth.