The book of Acts records the earliest days of the Christian church — from the coming of the Holy Spirit at Pentecost to the Apostle Paul’s appeals to see Caesar in Rome. R. Albert Mohler Jr. sat down with Andrew J.W. Smith to discuss the usefulness of the book of Acts for Christian life and discipleship in the context of his new book on the second half of Acts, Acts 13-28 For You. Below, Mohler discusses the book, which was published by The Good Book Company and is available at major booksellers across the country. The conversation explores proper interpretation of the book of Acts, the nature of Christian suffering, and the role of evangelism in the ancient and modern church.

This is the second book you’ve written in this two-part series on the book of Acts. Is there something especially interesting or powerful about the book of Acts that motivated you to write these books?

RAM: Behind the writing of the commentary is the preaching of the text, the exposition of the text. It’s grounded in the real-life experience of teaching the people of God from the book of Acts. The story is about the church born and the apostles ministering. Acts is the first history of the early church, but it’s more than just history. It’s the Holy Spirit-inspired record of the acts of the Holy Spirit through the church. Writing this commentary on Acts has been an extension of the thrill of teaching and preaching the book of Acts in the context of the local church.

RAM: Absolutely. We often think of the ending of the Gospel of Matthew as the Great Commission, and of course it is. But that same commission is the urgency that represents the very last words of Jesus to the disciples as they were there gathered — where just prior to his ascension, he gave them this command to be his witnesses. In this apostolic evangelism, the church is found as witnesses everywhere and unto the ends of the Earth.

As Paul is taken in chains to Rome, the reality is that he knew that he would not die one second before God’s purposes for him on earth had been accomplished.

You know, it’s interesting to note that the disciples did not know that Jesus was just about to ascend. But it’s so important that we know as we read the book of Acts, as the Holy Spirit has given us the book of Acts through Luke, that these were the words with which Christ left the church. And that means we are left with those words right now until he comes. 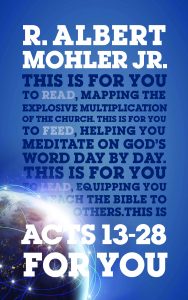 And certainly, when you look through the Book of Acts, you’re seeing suffering unto death. Just think of the martyrdom of Stephen. You’re seeing suffering under persecution that’s beyond our imagination. But you’re also looking at real-life human beings who are sometimes suffering in ways with which we can immediately associate. So, I think the church is often confused. Are we supposed to glory in suffering? No, we glory only in Christ, but we glory in Christ even in suffering. Maybe even especially in suffering, when we can’t glory in anything else or anyone else.

We also pray for our brothers and sisters who are suffering and we pray that our suffering and their suffering will be a witness. But you know, when I think of the Apostle Paul in particular and the theme of suffering, I realize the fact that Paul had to understand the sovereignty of God in a way that could only in his life explain how Saul could become Paul. And he had to know, and shares with us that great confidence he had, that nothing could separate him from the love of Christ.

So, here was the Apostle Paul, who shows us faithfulness through suffering. He was absolutely sure of this. Caesar was not sovereign; Christ is. Even in the midst of suffering, even in physical threat, even eventually the threat of martyrdom as Paul is taken in chains to Rome, the reality is that he knew that he would not die one second before God’s purposes for him on earth had ended and been accomplished. So, that is an even greater theme than suffering. It is that whatever happens to us, because suffering can often be very subjectively defined and it can become kind of obsessively worried over, I think the Apostle Paul would say, look, I’ve learned in whatever circumstance I am to be content, to give witness to the gospel, and to glorify Christ.

Paul was willing to be unpopular in his day and brought to public shame for the sake of his ministry. How can the Church today be like Paul and speak the truth despite opposition?

RAM: What did “public shame” mean? The ancients, most importantly the ancient Greeks and the ancient Romans, lived in an honor-shame culture. That was really the frame of reference. And that’s exactly what Paul’s talking about in 1 Corinthians, and especially chapter 1 and chapter 2. He knew that to those who operated out of a classically pagan worldview, the Christian gospel of a crucified and risen savior looked ludicrous and humiliating. But the Apostle Paul embraced it. Oddly enough, I think we are (perhaps for one of the first times in human history since the Apostle Paul in the Book of Acts, — certainly since the evangelization of the Roman empire) actually in the same position.

Again, I go back to an American college or university campus, certainly elite campuses. Put an 18-year-old Christian on that campus, what’s that young person facing? The threat of humiliation if people really knew what he or she believed. Embarrassment. “You really believe that salvation comes by a crucified and risen savior?” This is where we are, and it’s evidently in the sovereign purposes of God that the church be found here again.

What does the book of Acts have to teach us about evangelism?

RAM: Having preached and taught through the Book of Acts and writing this commentary, I think one of the interesting things that came to me about evangelism is that it is what the church was before it was that which the church did. You see it in all the active verbs throughout the Book of Acts. And then you also see the different examples: Philip talking to the Ethiopian eunuch, Peter speaking on the day of Pentecost, Paul, again dragged before authorities and even chained to jailers.

Evangelism exists wherever Christians are found doing what Christians are to do. We have evangelistic programs — that’s good. We train pastors in evangelistic preaching — absolutely, we should. But evangelism is rightly the church bearing witness to Christ, and that means to the specifics of the gospel. Telling people how they can come to know the forgiveness of sins and the gift of eternal life by faith in Jesus Christ and repentance of sins. That’s what the church is found doing whenever, wherever, under whatever circumstances it is found.

I think the book of Acts demonstrates that central theme tremendously, beginning with something as huge and public as the day of Pentecost and getting down to the Apostle Paul, who evangelizes while chained to a single jailer. In both cases, it comes down to witness to Christ.