I am a little embarrassed to admit this considering I am a professor at a Baptist seminary, but I came to be a passionate Baptist not because I thought baptism by immersion was the most compelling foundation but because Baptist ecclesiology was the natural outcome of what I understood to be the correct theory and practice of religious liberty. That may sound confusing, so let me unpack it. 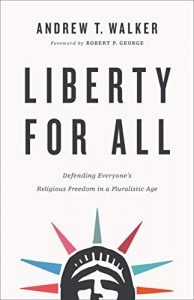 Liberty for All: Defending Everyone’s Religious Freedom in a Pluralistic Age

I grew up in central Illinois going to a Southern Baptist church. If you grew up outside the geographic South, you may have attended a Southern Baptist church without any real sense of it feeling explicitly Baptist. That is because in the North, at least in my experience, we did not understand ourselves as Baptist as much as just Bible-believing Christians. I remember going to the church we went to because, well, they believed the Bible without qualifying it a thousand times over with nuance and deference to our cultured despisers. In other words, they were not theological moderates or liberals. If you would have asked me as a teen if I were a Baptist, I would have answered yes, but only because I understood that I was not Catholic.

Feeling a call to ministry, I went to a Baptist college in southwest Missouri (Southwest Baptist University). Upon graduation, I went to the seminary where I now teach, The Southern Baptist Theological Seminary. At both institutions, I took Baptist history classes and became aware of our history and our theological distinctives, which I appreciated at the time but still did not feel overly zealous about.

This was not the fault of the professors. In fact, looking back, I recall that my two Baptist history classes were well taught, and the professors were passionate about their subject. Perhaps owing to my general immaturity, ideas like regenerate church membership, believer’s baptism, baptism by immersion, congregational authority, local church autonomy, and religious liberty did not really animate me. That does not mean I disagreed with them; I agreed with them because they seemed biblical. But ecclesiology was not front and center in my earlier theological angst. Questions about Calvinism, inerrancy, and the emergent church were front and center.

It was not until I “came of age” that my first jobs, incidentally, led me in a more fervently Baptist direction. My first jobs out of seminary were for think tank and advocacy organizations that focused on social conservative causes like the sanctity of life, marriage, and, well, religious liberty. Of course, I had heard of the issue, but at the time, I did not understand its urgency. What is now a token issue of concern for Christians was not so a decade ago. In 2008 to 2010, there was a different cultural climate.

Many of the religious-liberty challenges we are encountering now were predicted, at the time, by documents like the Manhattan Declaration. This joint document of Catholic and Protestant luminaries declared in somber tones that were the government to continue its leftward lurch, a reassertion of religious-liberty rights would be necessary, as would the possibility of civil disobedience. I knew I was treading in deep, turbulent waters. I recall that as I was getting my feet beneath me career wise, I was having to play catch-up on an issue that I was told was fundamental but was now threatened.

“If one does not possess the freedom to act on one’s most primary beliefs, one is not free in even the most basic sense of the word.”

So I got to work in both Kentucky’s capital and our nation’s capital on, among other things, religious liberty. I was largely unfamiliar with it, aside from what little I had learned in my Baptist history classes. It certainly was not, at the time, the top-tier pillar or foundation to my public theology as it is now. I argued for it because, well, my job required me to.

My work required me to read on the subject, and that is what I did. The heavy reading load in religious-liberty theory did not initially convince me of religious liberty’s importance as much as my immersion into the advocacy world of social conservatism, which necessarily and rightly treated religious liberty as a lifeblood issue. Because I was enamored of the intersection of first principles, theology, and political philosophy, religious liberty afforded me the opportunity to merge topics I was already passionate about but on which my inchoate understanding still needed tuning.

As I would learn, the posture a state takes toward religion is one of the most decisive indicators of whether it will be broadly pluralistic and limited or tyrannical and coercive. I would also learn that unless you have the requisite liberties to act on your convictions, you cannot do much of any- thing, whether worship in your church or advocate in the public square. If one does not possess the freedom to act on one’s most primary beliefs, one is not free in even the most basic sense of the word.

The idea that persons are endowed with self-constituting capacities that endear them to religion made more and more sense. If religion informs morality, then morality in public life hinges on the doctrine of religious liberty. Life, I came to understand, entails various types of liberties (speech, association, religion) in order for it to be authentic, meaningful, and worthwhile. The presence of these liberties determines what type of life someone will have in their community. In short, religious liberty is deeply intertwined with human flourishing and the common good.

All of these questions about religion and society led to a flood of first-principle questions, among them the following:

When I began to answer these questions, I was led to a distinctly Baptist ecclesiology. It was in the Baptist tradition, which had helped birth religious liberty in North America through the likes of Roger Williams and John Leland, that I saw the principles of religious liberty most fulsomely applied. How so? Because the questions above are best answered in light of key Baptist ecclesiastical distinctives that focus on the individual and the associations they form in life.

Based on both natural law and overlapping similarities with principles that emerge from Scripture, like widening concentric circles, religious liberty is based on an understanding of (1) individual assent, (2) group association, and (3) institutional distinction. These are reflected in the practices of individual conversion and regenerate church membership, which entail a distinction between membership in the church and membership in society and between the institution of the gathered church and the institution of the state.

Religious liberty implies a recognition that individuals make conscientious decisions to participate in group associations that have different requirements and different callings than the rest of society and the state. In my view, these truths lead one inside the walls of a Baptist church.

Editors’ note: This article is excerpted from Andrew Walker’s new book, Liberty for All: Defending Everyone’s Religious Freedom in a Pluralistic Age. Used by permission of Baker Publishing Group, www.bakerpublishinggroup.com