Over the last hundred years, a cultural, moral, and political shift has taken place in Western society that has led to broad devaluing and rejection of Christian truth claims both privately and in the public square. The place of Christian convictions have gradually eroded, and this erosion will have tectonic effects on modern society. Evidence for how this shift has reshaped and will continue to reshape modern society is available for all to see, if people will only look, argues R. Albert Mohler Jr. in his newest work, The Gathering Storm. 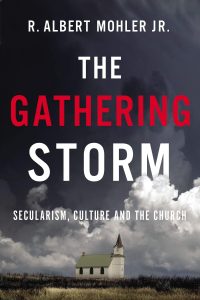 A storm is coming. Western civilization and the Christian church stand at a moment of great danger. The storm is a battle of ideas that will deter- mine the future of Western civilization and the soul of the Christian church. The forces we must fight are ideologies, policies, and worldviews that are deeply established among intellectual elites, the political class, and our schools. More menacingly, these ideas have also invaded the Christian church. From threats to religious liberty and redefinitions of marriage and family to attacks on the sacredness and dignity of human life, the perils faced by the West and the church are unprecedented. How should Christians respond to this challenge?

The Gathering Storm addresses questions like worldview, western civilization, marriage and the family, gender and sexuality, as well as other topics. These are issues you have spoken about publicly in some way for over thirty years. Why this book now?

In every generation, Christians have been called upon to understand our responsibility for the particular cultural moment and context within which we find ourselves. This has been true throughout the history of Christianity. But when we look back at church history, there have been times when there was a particular urgency about asking the question of our responsibility, because the culture had experienced such a massive transformation. It’s not just the transformation of the culture in the big tectonic plates of economics and politics, but also at the deeper level of morality and even the understanding of reality and the consumption of truth. There are times in which it seems all of these things are coming together, and that’s exactly what characterizes our time.

I have self-consciously borrowed the title, The Gathering Storm, from Winston Churchill, who is one of my heroes of history. Churchill largely stood alone during the 1930’s, as he saw the storm of war gathering. Others denied that Churchill had even seen clouds, but history proved him horrifyingly right. When Churchill wrote his history of the second World War, he entitled the first of those six volumes, The Gathering Storm. Like Churchill, Christians need to see and understand the gathering storm in our own day, and then we need to step into the next responsibility, which is thinking seriously and biblically about what the times will require of us.

Secularization has the effect of eroding truth claims over long periods of time—even in the church. What can a Christian do to ensure their own faithfulness and defend against secularization eroding their own convictions?

Our beliefs are contaminated unless we do two things, and these two things are paramount. First, we must turn to the Bible so that the living, breathing, and infallible Word of God will cleanse us of cognitive contamination. We cannot expect that our thinking will be biblical unless we are immersed in the Scriptures, unless our thinking is predicated upon the truthfulness of God’s Word. We must hear God speak, obey him, and have our minds filled with the cognition that comes from the Bible.

Second, we must be deeply involved in the life of a local church. As it meets together in worship and shares the gift of Christian fellowship together, a local church practices communal cognitive detox. That is part of what we’re doing when we gather for worship. We do renew our minds with the songs we sing. If the songs we sing are robustly biblical, then we are fulfilling what Paul exhorted the Colossians to do: We are encouraging and cognitively correcting one another with psalms, hymns, and spiritual songs. Then, by our prayer, we are cleansing our thinking and beliefs. Of course, the same is true when we sit under the preaching of God’s Word.

When we participate in a healthy local church, our minds are transformed by the kind of constructive brotherly and sisterly Christian conversation that can only come in fellowship there. Sometimes we have to say, “What do we exactly mean,” or, “What you said is almost right, but maybe we can learn to put that in a way that’s even more biblical.”

In our time—especially in the West—historic Christian convictions are both disapproved of and also increasingly seen as hostile to the status quo. What precursors from history might encourage Christians today?

My ultimate confidence in writing The Gathering Storm is that Jesus Christ is Lord, and thus no storm will mean the end of Christianity, the end of the church, or the end of truth. Nevertheless, a gathering storm can represent a real and an unavoidable challenge for us. Through its twenty centuries of existence the church has had to face all kinds of storms. When you think about our particular cultural moment, we are being told that we are on the wrong side of history, that we hold positions that cause human suffering and unhappiness rather than human flourishing. But we must recognize this: Christianity was born into a hostile culture.

For the Christian Church during those centuries of persecution, it was horrifying in so many ways. Persecution required the church to work out, with fear and trembling, its theology based upon the Bible. But that persecution created an environment for an incredibly powerful gospel witness to the Roman Empire. So much so that the Roman Empire, in its last years, tried to get on the right side of the church, believing, all of a sudden, that the church was on the right side of history.

God is sovereign over the times, as he is sovereign over all things. We are not in this time by accident, but we’re also not in this time without the lordship of Jesus Christ, the power of the holy Scriptures, the saving truth of the gospel, the reality of the church of the Lord Jesus Christ, remembering that Christ said, “upon this rock, I will build my church and the gates of hell shall not prevail against it.” We are not without the confidence that we are on the right side of history, because we are on the right side of eschatology.