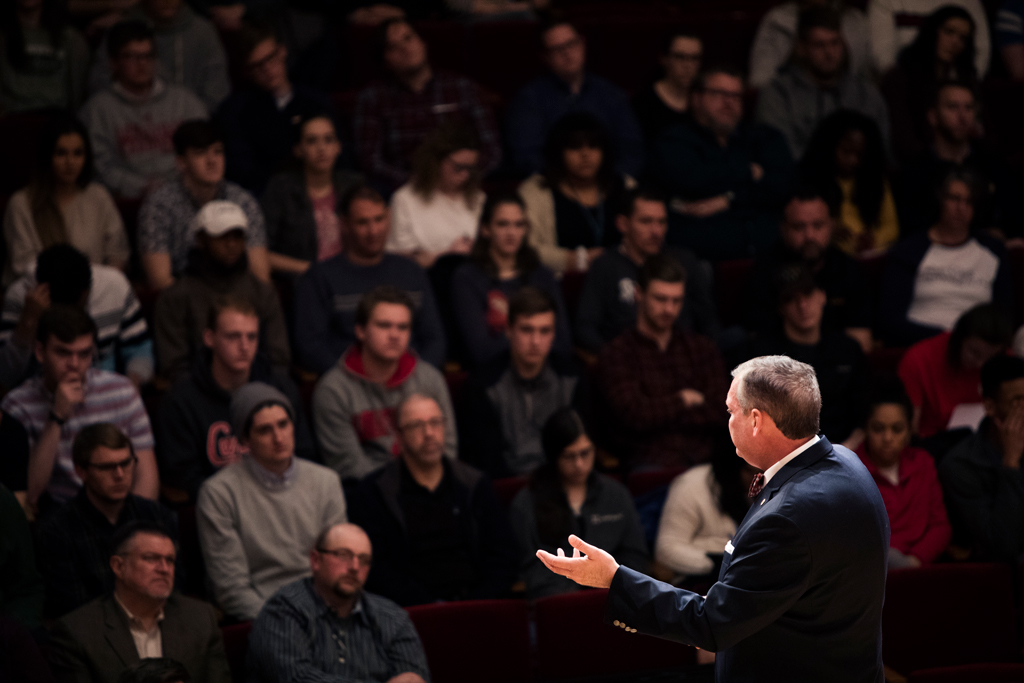 Students from the University of Louisville sat for an hour-and-a-half to ask questions of R. Albert Mohler Jr. They wanted to know about belief and Christianity — whether religion could still be reasonable. So hundreds gathered in the Margaret Comstock Concert Hall on the UofL campus for the first event of the Ask Anything Tour, seeking answers from Mohler, who sought to demonstrate that Christianity offers a logically consistent and existentially meaningful answer to the world’s most fundamental problems. One student asked about the Christian understanding of gender and transgenderism. Another asked why God allows “80 percent” of the world’s population to spend eternity in hell. Yet another student asked about Christians participating in stem cell research and therapies. In all, R. Albert Mohler Jr. answered questions as varied as the people in the room in the second event of the Ask Anything Tour.

An estimated 1,000 students crammed into a conference space in Carnesdale Commons, with overflow spaces streaming the event on TV screens. Each question received a specific answer from Mohler, but every answer came from the same place: historic Christian thought based on the Bible.

For nearly two hours, Mohler addressed wide-ranging questions related to the problem of evil, evolutionary theories, and God’s exclusive means of salvation. And for each, Mohler argued Christians must begin their reasoning with the Bible.

“What God thinks about this, and has revealed about this, is of ultimate consequence,” Mohler said. “Anything I say about anything, and especially something like this, you should test by Scripture.”

Truth and Consequences, Feb. 10 and March 3

Ligonier also hosted Truth and Consequences at both Louisville and UCLA. At these events, Mohler was joined by Ligonier teaching fellows Burk Parsons and Stephen Nichols in teaching directly to Christian students and student ministry leaders about apologetics. The three organized their talks around three theological premises: God is, God speaks, and God saves.